Between April 17-20 “Friends with benefit”, a silent benefit auction, will take place at the Center for Contemporary Art in Tel Aviv, the CCA. Over 30 works of art will be on sale courtesy of Israel’s leading artists and collectors, with all proceeds benefiting the CCA’s expansive exhibitions, public programming, publications, the Fund for Video Art and the Israeli Video Archive.

The free closing event seems to be also an interesting party to attend. It will be held in cooperation with the Tel Aviv Arts Council on April 20th, with DJs, drinks, and the chance to buy Israeli art.

Note that the auction will closes on Saturday April 20th at midnight.

Here is a selection of works, accompanied with small explanatory texts (written by Yael Ravid and translated to English by Aya Breuer), that drew my attention and which will be featured at the auction. 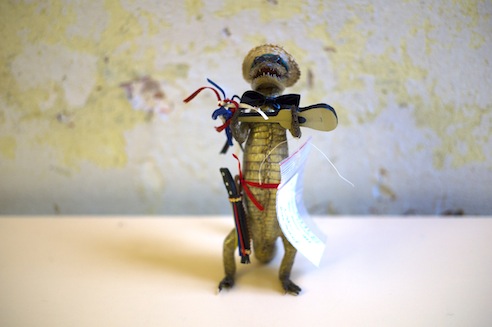 Dana Levy’s Confiscated Souvenirs follows items seized by the French Customs Office at Le Havre crossing point in compliance with the Washington Convention, the aim of which is to regulate and control the international trade in endangered species of wild fauna and flora. Bought by Westerns in the Far East or Africa, these exotic objects are not allowed into Europe. The items catalogued and shelved in the customs house constitute a makeshift museum of bizarre objects such as taxidermy animals which are held forever in the “border” zone between West and East/South, between “civilized” and “wild” worlds.

The work explores a space of display and representation that appropriates and defines objects; and in this sense it can be seen as a direct sequel to Levy’s works, which were filmed at natural history museums in France. Her preoccupation with cataloguing and taxonomy turns Levy into an artist-archaeologist who excavates esoteric hidden spaces and reveals them to the spectator. 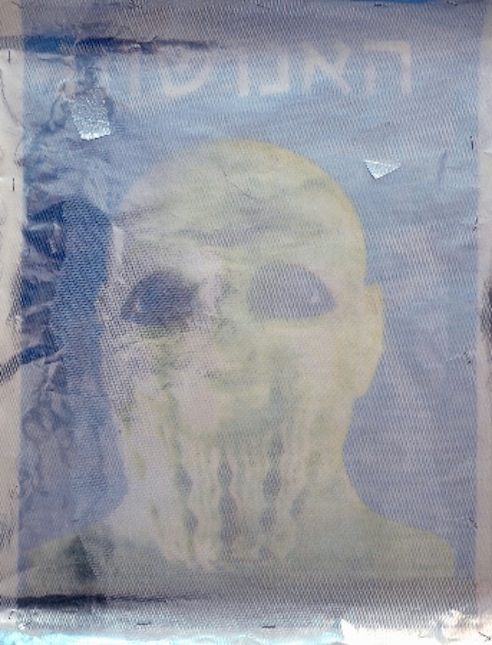 Izhar Patkin’s multi-layered portrait is printed on several gauzes. A possible interpretation of the work and its title, Humanity, alludes to the elusiveness of mankind. The portrayed figure seems like a ghost, a recurrent motif in Patkin’s works.

Named after his uncle who was killed during his military service, the artist relates that his dead uncle’s portrait haunted him like a specter in his childhood. This motif is referenced in many of his works in the shape of transparent veils and curtains. The 2012 retrospective at the Tel Aviv Museum of Art was called Wandering Veil. This work too features an illusive ghostly pale face. The portrait’s multiple layers do not betray the technique by which the work was made leaving us with unanswered questions. 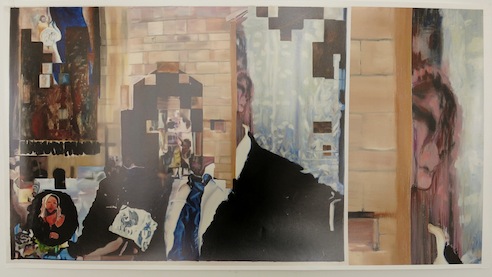 Eli Petel’s work is based on a personal experience. While watching news online, he encountered difficulties due to poor streaming quality. As a result, frames of several events and persons were frozen simultaneously on his PC screen (the trial of former Israeli president Moshe Katsav, Pope John Paul II’s visit to Israel, sporting event and an image of Binyamin Netanyahu).
Using the “print screen” command, Petel captured the picture shown on his computer screen. Subsequently, he copied the captured image onto a canvas painting it with intense and color-saturated brushstrokes. In the final phase of the work, he photographed the painted image and printed it, before destroying the painting itself. The confusion experienced by the artist while watching that online newscast was translated into the confounded media of painting and photography. The inadvertent reediting of events and images produced new narrative of hybrid reality.

Glass drum sticks embody the force of music (the potential bursting of one phrase into hundreds and thousands tones) and clarify that we are dealing here with an instrument the use of which brings about its shuttering. In this work, Tsabar is looking into definitions of gender roles inherent in the materiality of her drum sticks and the nature of playing drums – fragility and tenderness as opposed to toughness and harshness. Tsabar made a name for herself for her works’ outstanding combination of movement, sound and installation. Her installations are constructed of conventional and invented musical instruments, speakers, gaffer tapes etc. She explores spaces with the help of sound. In her works, the gallery walls metamorphose into musical instruments, which are sometimes operated and brought to life by the viewers. Tsabar often collaborates with musicians and other artists who perform in her installations and create music with her unusual instruments (for example, for the duration of her solo exhibition at Thierry Goldberg Gallery in New York, Tsabar’s site specific installation functioned as a music lab, in which a new piece was composed every week). 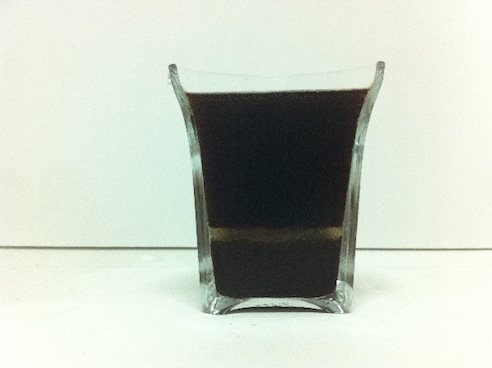 The object shown in this work is a glass of coffee cut exactly in half. Weinstein presents a geological-like cut of the glass. The local “authentic” image, a glass of Turkish coffee, also called “mud” or “black” coffee, has political, cultural and social implications. Drinking this kind of coffee is usually related to Palestinian workers and day laborers of low socio-economic status. This work thus belongs to the long series of works in which Weinstein is engaged in the deconstruction of Zionist myths.