Exhibition: SPLASH! (Presented by the CCA and Jet Lag Productions)

“SPLASH!”, a multi-media collaboration of the two artist-filmmakers, Vivian Ostrovsky and Silvi Simon, is currently on show at Jaffa Port’s Hangar 2.

The project is made of 16 mm film projections screened on different types of objects, from complex glass mobiles and other hand-made sculptural objects crafted by Simon and referred to as “filmatrucs” to found seaside objects such as fishnets.

Horizon (image courtesy of the artists and CCA, Tel Aviv)

This is the third time Ostrovsky and Simon are collaborating on an installation. The previous times were with “Ocean Bazaar” which was presented in Portugal at the Film Festival “Curtas Vila Do Conde” and then  in Paris. The focus on the 16 mm film and on the artists’ common fascination for the low tech side of cinema was present in all venues, and this is again the case with “SPLASH!” in Tel Aviv.

For “SPLASH!”, the footages were both filmed by the artists and found on the internet, thus merging the personal with the collective. Many of them, for instance, were done by Ostrovsky on the beach in France where Jacques Tati’s iconic movie “Mr Hulot’s Holiday” was filmed.

The space at the Jaffa Port was a challenge for the artists, because of its large size and rough nature, but it was also a natural choice given the proximity of the hangar to the Port, with its fishermen, boats, birds and seaside elements.

The large space also allowed them to include many ambitious pieces, like the beautiful and poetic wall, made of ventilators and used as a screen for one of the projections. 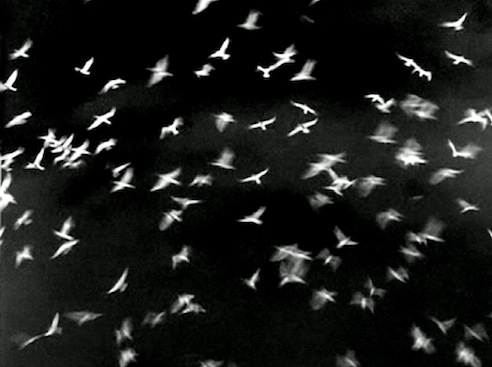 Birds (image courtesy of the artists and CCA, Tel Aviv)

The installation gives the viewers a strong feel of nostalgia, not only for the Sea and its associative elements but also a nostalgia for early cinematographic techniques such as the 16mm and super8 films and for low tech mechanisms.

Although the exhibition is in constant dialog with the exterior environment of the Jaffa Port, it offers at the same time, a real disconnection from the outside world. The visitors are invited to come in, wonder around the elements and get lost in the dark space, with their own memories and experiences of seashore holidays and early cinema.