Oh-So-Arty is glad to announce a new section on its blog: art works by emerging and also established Israeli artists, in a price range of USD100 – USD5,000.

All the pieces offered on the blog will be either commissioned or existing editions and unique works.

This is a great way to bring art into your life, diversify your existing collection or give the perfect gift, and by this also support Israeli artists. 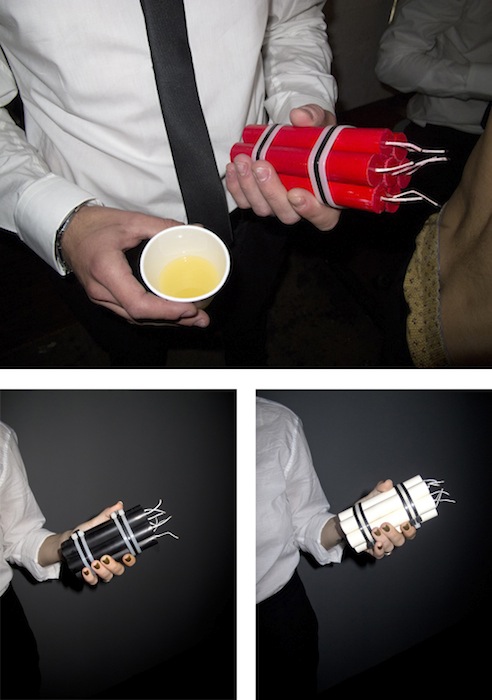 Dynamite! is an attempt to challenge the notion of consumption: a (mock) dynamite bomb which remains in a state of potentiality. Fire, smoke and bombs are recurring motifs in Rodeh’s works; through them the artist seeks to trace the origins of human agression and destructive urge.

Alona Rodeh was born in 1979 in Israel and is based in Tel Aviv. Her diverse practice relies on a wide range of media, constructing time-based installations, often described as “performance without performers.”

Graduating with honors from Bezalel Academy’s MFA program (2009), including exchange studies at RCA, London, Rodeh was honored with the following awards, among others: Outset grant (2013), BM:UKK AIR, Vienna (2011), Young Artist Prize (2011) and Artist-Teacher Prize (2009), both from the Israeli Ministry of Culture; and Artis grant (2012). Rodeh has performed at the 54th Venice Biennial; The Israel Museum, Jerusalem; and has presented commissioned projects at Plug In ICA, Winnipeg, the Center for Contemporary Art, Tel Aviv; the Israeli Center for Digital Art, Holon; Herzliya Museum of Art, and Petach Tikva Museum of Art, among others. In September 2013, Rodeh will embark on a yearlong residency at Kunstlerhaus Bethanien, Berlin.

“Above and Beyond”, Alona Rodeh’s first major institutional solo commission, is on show at the Center for Contemporary Art (CCA) Tel Aviv till the 29th of June, 2013.

Prices do not include shipping costs and taxes.