A few weeks ago I had the chance to interview French collector Philippe Cohen about the show “Honey I rearranged the collection”, dedicated to his collection and curated by Ami Barak at the Petach Tikva Museum.

The exhibition will run until August 24th, 2013. Don’t miss the opportunity to see important works by international and Israeli artists and to discover, through this show, Cohen’s personality and vision.

The interview was done by Oh-So-Arty in French and edited by Rachel Samoul from the blog Kef Israel. It was later translated into English.

– Philippe Cohen, you are a dentist and a collector. Why did you start collecting Contemporary Art?

Those who ask me about my collection always think that, with this type of a Contemporary Art collection, I must be an industrialist, or that I either work in fashion or in advertising. So there is always a shock when I tell them that I’m a dentist. Obviously, it’s not through the practice of dentistry that I have arrived to Art, but simply through encounters. The most important one was with Philippe Segalot, a very good friend of mine and a very important art adviser, he was also at the preview of my collection. In 1992, I accompanied him to see an historic exhibition in Lausanne “Post Human” which was curated by Jeffrey Deitch. This exhibition was also shown later on at the Israel Museum. The participating artists included Felix Gonzalez-Torres but also Paul McCarthy, Cindy Sherman and many more who have become major artists. It was a trigger for me, I bought that day my first catalog about Contemporary Art and I spent weeks reading it.

What was the first art work you bought?

I wanted to collect the Art of my time but very quickly I had a rejection of contemporary painting. I couldn’t understand the interest in the act of painting today in relation to paintings from the first half of the 20th century or from earlier periods, especially as I was already collecting drawings from the 19th century. This brought me immediately to a post-conceptual Art and the first serious piece I bought in 1993 was the “Perfect Vehicles” by Allan McCollum- the five vases in different colors which are in the show in Petach Tikva. So straightaway the collection was oriented to the questioning of the act of painting. There is also in that piece the obsessive and repetitive sides of the seriality which is characteristic of my temperament, because often the Collector is obsessive. I love this piece as much as I did 20 years ago. 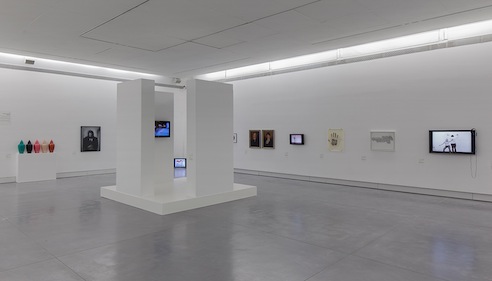 Honey I rearranged the collection, Petach Tikva museum of art

And today, how many pieces do you posses?

Organizing a catalog and an exhibition was a great occasion to put a bit of order in my possessions. I didn’t organize it 100% but about 90%. I think there are 250 pieces in the collection and in the catalog, we reproduced 160 pieces. We have included almost 95% of the artists of the collection but we couldn’t include all the works because sometimes there are sets of 10-15 drawings by an artist and so we had to do, with my curator Ami Barak, a selection. In the show there are exactly 100 pieces, which is not bad.

How did you come up with the idea to do an exhibition for your collection? Was it a dream?

I’m not sure if we can talk about a dream because I don’t have this kind of pretensions. I love talking about my collection and my acquisitions with my collectors friends, and with museums curators. It’s, above all, an exchange, I like this exchange in Art, around the artists and especially around the works. But it’s really my friendship with Ami Barak that was the trigger. During a conversation that dates back to 2-3 years ago, Ami told me: “You know you should show your collection”, I said: “ Really, you think so?” and that’s it. Even if I knew a lot about my collection, I learnt even more by seeing it differently, especially through Ami Barak’s eyes. 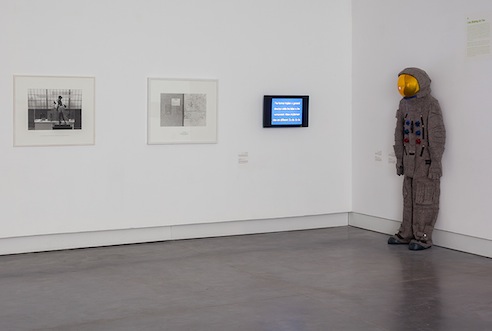 Why did you choose Israel as the first venue to show your collection?

Israel is so important in my life ever since my childhood and since my beginnings as a collector, I had the chance to get to know the art world in Israel; Yona Fisher who guided a lot of people here, the artist Moshe Ninio, Shifra Shalit when she was the cultural attache of the Israeli Embassy in Paris and of course Ami Barak. I help the Israel Museum with the French Friends of the Museum and I created 13 years ago with Suzanne Landau its acquisition committee. When I was young, I was an activist in zionist movements and then at the Keren Hayessod in France and finally I became a collector. And it’s an incredible chance that I was asked to link this passion for Contemporary Art with my love for Israel. It’s a fascinating experience. The regular exchanges with the French Institute, Lionel Choucroun, Olivier Rubinstein and the persons who preceded them, allow this porosity between these two countries, France and Israel. Yes, it’s fundamental to start the exhibition of my collection in Israel!

Tell us about the Israeli artists that are represented in your collection.

The Israeli artists are well represented, but not in a compulsive way. Friendship is very important for me. I love an art work, I love an artist, they become my friend, I collect their works often. In this way, there are quite a few pieces by Moshe Ninio, by Joseph Dadoune and then by less known artists such as Itzik Badash with whom I have strong ties. Other pieces include for example works by Pavel Wolberg and Miri Segal thanks to Shifra Shalit and Adi Nes thanks to Irit Sommer. And then there are Israeli artists that I got to know outside of Israel like Ariel Schlesinger during his show at the Yvon Lambert Gallery in Paris.

Exhibition view with Miri Segal’s installation “Whatever you say?”, 2009

I imagine that it was very difficult to choose between all the art works.

It’s not that difficult. When you choose, you are guided by the space that welcomes you. The Petah Tiqva Museum offers a really appropriate space for my collection, more confined spaces, next to a huge space, that big room in the middle, where you can hang large formats, show a lot of pieces at the same time. It’s again a story of friendship, with Drorit Gur Arie. A perfect space for my collection and a friendship with Drorit. 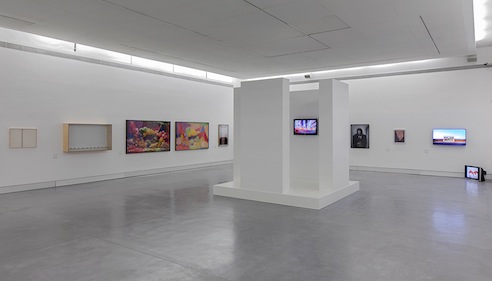 If you could choose one piece from a different period, which one would it be?

It’s a good question because there is such a piece in the collection, so you should be asking yourself the same question (laughs). You need to return to the exhibition and to do “Seeing Seeing”- the Tania Mouraud piece explains it all. If you don’t force your gaze, you don’t understand. It’s normal, sometimes you need codes to get Contemporary Art. You need to read, that’s why we have an exhibition catalog. “Seeing Seeing” is one of the heads of chapters. It’s a fundamental work for me and it was important for me to show it in Israel even if Mouraud is not that well known here. “Seeing Seeing” is also “Listening Listening”, it’s “Thinking Thinking”; this redundancy shows that it’s important to take the time.
And so in the exhibition there is one work, – very small- by an artist from the 19th century, Alfred Dehodencq, an Orientalist painter who depicts Morocco where I was born. I collected the preparatory drawings for Dehodencq’s large paintings of the Moroccan Jewish life. Together with Delacroix, Dehodencq was the best painter from the 19th Century to depict the Jewish life in Morocco. In that period, the muslims didn’t allow artists to paint them and the French painters who travelled the Orient painted the Jewish communities, these are the first testimonies before photography of Jewish life in Morocco. I collected these drawings for 20 years and when the collection was completed, I donated it to the Israel Museum. They did an exhibition and a catalog for the collection last year. The only work I didn’t offer is a piece with a non-Jewish theme, very intimist. It’s a torn envelope where there are sketches of Moroccan prisoners. What is amazing about this enevelope is that it is adressed to the painter’s son and one can read “To Mr. Alfred Dehodencq son”, and I imagine Dehodencq walking down the street to send the letter to his son and seeing in front of him a scene he just couldn’t stop himself from drawing on the letter to his son. The piece is in the museum’s entrance, lost in the middle of the wall with all the drawings, those who know me well enough have noticed it (laughs).

Have you had, in your career as a collector, moments of doubts, moments where you wanted to stop everything?

It’s true that at one moment the idea of stopping everything came to my mind because I felt that the level of artistic production and that what art critics were saying or writing about the works was not as pertinent as before. I was frustrated because I found (and I’m sorry if this might sound pretentious) that the Art was less intelligent than before. Until I discovered Tino Sehgal’s oeuvre, an artist who creates situations where the collector is in charge of a sentence. It’s a relation between the collector and an audience, his friends. Another friendship relationship! I pronounce this sentence and I hope to trigger a questioning of the status of the work of art. Friends ask me: why are you doing it? because I want to be able to also show works without images, or to stop collecting images that bring me nothing- and what is the interest in showing them? Well, because I want to talk to you about it, I want to be in touch with you, art is not only about voyeurism, it has to be a physical reaction, between the work and the spectator. The work by Tino Seghal which I have acquired is called, “This is Technology”, I need to say this sentence like a robot and obviously in a collection of video art this was interesting. I have other works that talk about dysfonctionnement in my collection, like “Unplugged Video” by Pierre Bismuth who acquired a video by Bruce Nauman, but it’s actually an unplugged monitor, because there is absolutely nothing to see. That’s also interesting, works where there is nothing to see. Tino Seghal’s piece is an immaterial work: no images, no certificate, it’s just a few words to share with others. He gave a new life to my collection. I prefer collecting concepts than images.

How do you envision the future of your Art collection?

“Honey I rearranged the collection”, I thank Ami Barak who came up with this title. It’s the title of a work by Allen Ruppersberg which we appropriated for ourselves, like many of the works that talk about appropriation in my collection. At the same time, I address myself to my close relatives, because my wife, my children, have supported all of this for 30 years.
I don’t know how my collection will evolve but I know that I am a passionate person, I did my profession with passion since I was a professor at the dental faculty for 10 years, I was an activist, I collected drawings from the 19th century, I collected Judaica, I collected Contemporary Art and I study sacred texts. It’s my passion that guides me in everything.

All installation views are credited: