Moshe Gershuni, The Main (Real) Problems are with the Tongue and the Toes, 1972

The exhibition “The 1970S in Israeli Art: My Own Body” is part of the project “6 Decades, 6 Museums- 60 Years of Israeli Art”. In honor of Israel’s 60th anniversary, each of the six participating museums has created an exhibition which is dedicated to one decade of art in Israel.

This exhibition takes place at the Tel Aviv Museum of Art and is concerned with Israeli art from the period between 1968 and 1978. The show is divided into two major sections, “Self Portraits” and “The Artist’s Body”, and highlights the artists’ use of their own body in their art.

Walking through the exhibition, the visitors discover the way artists of the time were impacted by the political, social and cultural context of the 70s in Israel.

I particularly appreciated a work by Joshua Neustein called “Erasures”, which is a video representing hands continually and repetitively drawing and erasing a Magen David (Star of David): 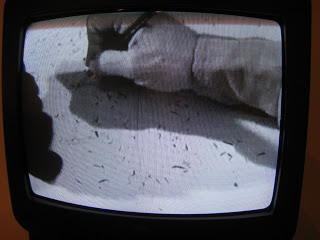 Another aspect that I will strongly remember from this exhibition is a quote from 1977 by the late Israeli sculptor Itzhak Danziger:

The question of “the role of the artist”, raised in this quote, is a fascinating issue and I often wonder: To what extent artists are aware of this so-called “role”? Does such a role even exist? And what do we, as viewers, expect from the artist?”

One Response to “Recommended: The 1970s in Israeli Art: My Own Body”